on experiment and a human approach in opera 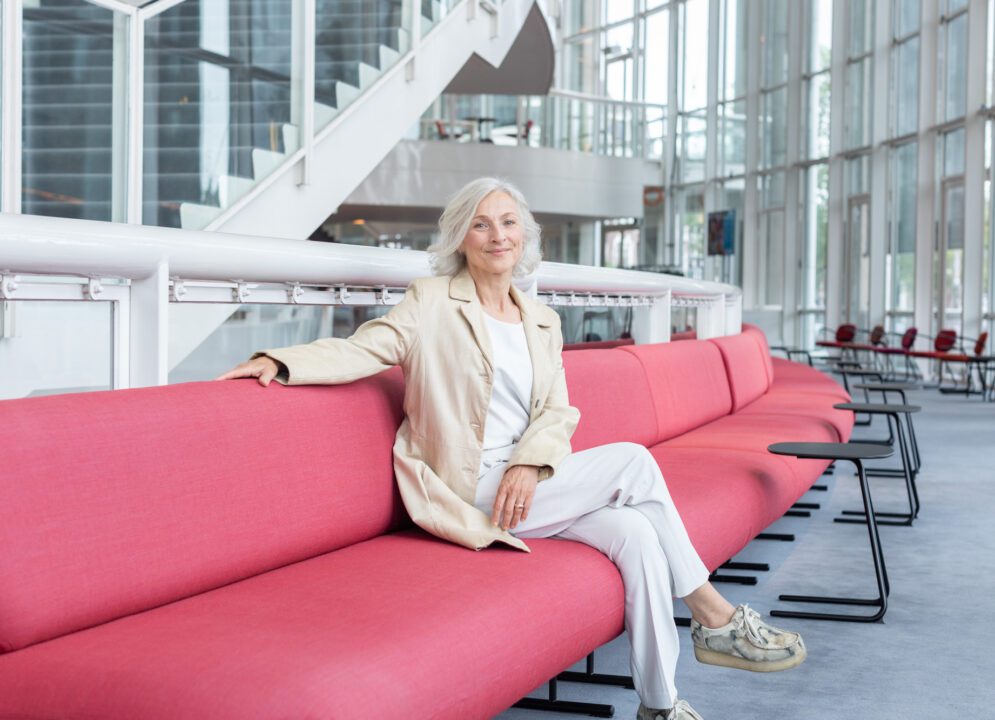 British soprano Rosemary Joshua is Artistic Director of the Dutch National Opera Studio, a two-year talent development programme established in 2018. At the start of the programme’s fourth instalment, Ammodo spoke to her about the Studio’s role in the development of opera as an art form.

What inspired you at the start of your career?

As a performer and young artist, I was inspired by working with conductors. I had a very privileged start, working with internationally renowned figures such as Sir Charles Mackerras, Sir Colin Davis, William Christie and René Jacobs. I performed a lot of roles for the first time with these conductors. At the start of my career in the early nineties, it was common to have up to five weeks of rehearsal time with the conductor present. They weren’t flying in and out like they are today. That was a luxury.

There is a lot of luck involved in making a career in opera. I was lucky to start my career at the English National Opera. I just happened to come out of the conservatoire while three renowned figures were in charge at the English National Opera: Peter Jonas, David Pountney and Sir Mark Elder. They were ‘the Powerhouse’ and had a great propensity for experiment. Therefore I was exposed very early on to forward-thinking and exciting opera making.

Can you give an example of the experimental nineties?

The company came from a very traditionalist time when Jonathan Miller did an incredible Rigoletto by Verdi that broke all the records at the box office and ran in the company for decades. Around the same time, his iconic Mikado replaced the Japanese setting with an English 1930s seaside hotel. I remember a Don Pasquale by Donizetti where I made my entrance on a motor bike as Norina. Motorbikes hadn’t ever been on a main stage before. We had Nicholas Hytner and David Alden who brought baroque music to the public again. We made iconic productions that were risqué at the time. They were really leading the field of opera, engaging audiences by transporting works into new contexts. This enhanced and enthralled the public, we didn’t lose anyone at the box office.

How experimental is opera today?

At some stage opera became a little lazy, stating the bleeding obvious where everything would be spelt out in black and white. We have to be a little more provocative. If you wet people’s appetite and if you pique their curiosity, it will encourage them to keep coming. We should not try to educate the public too much. It is their curiosity we need to encourage. We do this at the Dutch National Opera by working together with people from different disciplines, like film director Nanouk Leopold in Der Zwerg, or fashion designer Jan Taminiau in Ritratto. Opera has to fit into this completely new world of the visual. This is an interesting struggle.

What is the vision behind the Opera Studio?

The Opera Studio is set up as a stable, giving seven or eight young talents the chance to develop at their own pace in a professional but protected environment. They all share the same ambition: to find their way and investigate the world of opera. Working with such a small group, enables us to support them all individually in their musical and artistic paths. In the Studio, singers can develop by trial and error. This possibility is lacking in the current industry – because it is so costly, the process of making an opera is kept short. But young singers need time to find themselves as artists. What are their strengths and weaknesses?

What is special about our Studio is that we function very much in the heart of the company. It is not a studio that is running itself in the sidelines. We are established inside the house. We work with the music staff of the house, take part in the main productions and eat in the same canteen. This way, the singers can truly be a part of the big machine.

What criteria do you have when selecting singers for the Opera Studio?

The easiest thing to do would be to go to all the major competitions, and just pluck competition winners. That is not challenging enough. I am trying to find a more human and honest approach. First and foremost, I want to be engaged and excited by the sound of the human voice. Normally, I spend the first thirty seconds of an audition with my eyes closed in order to experience if a voice touches me. Does it make my heart beat a little faster? Does it make me sit up, because it is something new and unique? And then of course I look at the individual. Those artists who come on stage and are able to transcend the nerves, show their humanity, and have something authentic to say – this is what interests me.

We have a bass singer from South Korea in the group this season. I initially heard him in 2017 and thought he had a phenomenal voice. I offered him a place in our first Studio launch year. Unfortunately he was called to military service. He served for two full years and the opera scene assumed that would be the end of his career – you are forgotten as quickly as you’re discovered in our industry. About eight months ago he and I came into contact again. Somehow, he had managed to keep his voice in shape during his service. I wanted to give him another opportunity that he had missed two years ago. We need this human approach in the opera world.

From a didactics perspective, what are you trying to bring out in the young talents?

First of all, I never make any assumptions about a singer. The beauty of my position is that I am constantly surprised by the artists. I trust them, and help enable them to go as far as they can individually. I cannot transform them into anything they are not meant to be, which would be a ridiculous concept. I help them discover the best version of themselves as artists, try and inspire them, encourage their imagination and curiosity. My job is also to be clear and disciplinarian. I have to teach the singers to behave professionally in a large company like the Dutch National Opera. They must never forget that they are ultimately just a small piece of this bigger puzzle.

How does the Opera Studio relate to the institute of the Dutch National Opera?

These days we strive to bring opera to new audiences. To encourage this, we have to be experimental and imaginative. Singers are often single-minded, perhaps because they have been educated in renowned but often traditional conservatories where they are focused on unimportant matters like gaining diplomas. One of the tasks of the Studio is to make them more creative and explorative in their work. It does not matter how much talent you have. If you’re not flexible and open to embrace all the possibilities of the art form itself, how to create and recreate it, I do not think a singer can have a very long trajectory these days. Our singers have to evolve with the art form in all its many forms and structures today. Their training at this early stage can hopefully help them spark and develop further interest in the art form.

What are the biggest challenges for the current generation of opera singers?

Today, the pace in opera is crazy. The turnover is incredibly fast. There is less preparation time, less rehearsal time, less orchestral time, less studio time. This means a lot more is expected of the individual artist in the preparation before the process.

Thirty years ago, you only performed for the audience in front of you. Today, you are not only performing to an auditorium, but possibly for a global online public. Every performance must be your very best. If you have an off night, everyone is able to access it whenever. That’s very unforgiving for an artist, because they cannot be on top of their game all of the time and the pressure is immense.

I would say the competition is also more fierce than ever. Artists really have to grab the opportunity when it comes along.

If you could name one person to collaborate with on the Opera Studio, who would it be?

It would be the British director Richard Jones. He is a mad genius. Richard works in straight theatre as well as opera and has a very strong and vivid vocabulary of cross-references. While creating a production he might reference a sitcom, soap opera, MTV, film, high art or a particular painting from the sixteenth century. His knowledge is immense, like a never-ending fountain. Working with him is like stepping into the big encyclopedia that is his brain. For young singers it would be a terribly exciting and informative opportunity to experience his incredible talent and years of experience.

Where do you see yourself in the coming years?

My current position is extremely rewarding. I cannot think of many jobs that could give me this much satisfaction. Ultimately I am an artist and I will never stop being an artist. I need to find the space to create and be creative and to avoid artistic frustration. In my teaching and coaching, I see everything from an artistic point of view and the process is deeply fulfilling. Every decision I make regarding my singers is through the eyes of the artists and how to enable them to grow individually. As the head of the Studio I have to balance my work for the institution while staying focused on my young talents’ needs. It is an exchange of trust. Leading the singers, inspiring them, enabling them and making them feel valued is the most wonderful part of the job and a complete gift.