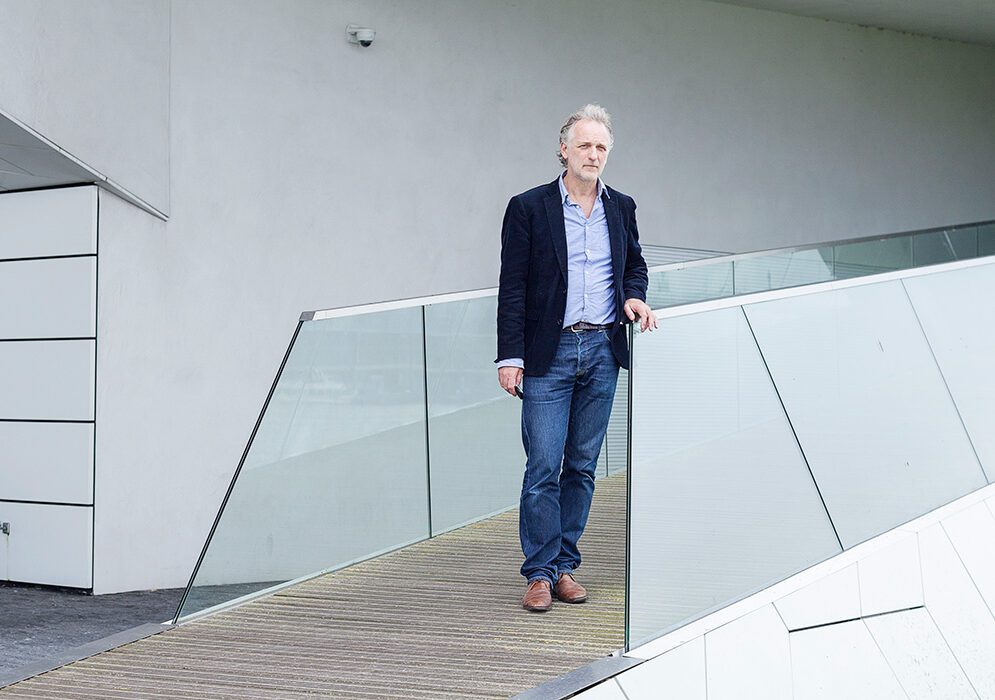 The EYE Film Museum (EYE) in Amsterdam focuses on managing, restoring and displaying its collection of more than 37,000 films. One of the many ways that EYE goes about this is by highlighting the works of major film directors such as Antonioni and Fellini. EYE also has a particular interest in the history of the experimental avant-garde film and the relationship between cinema and the visual arts. 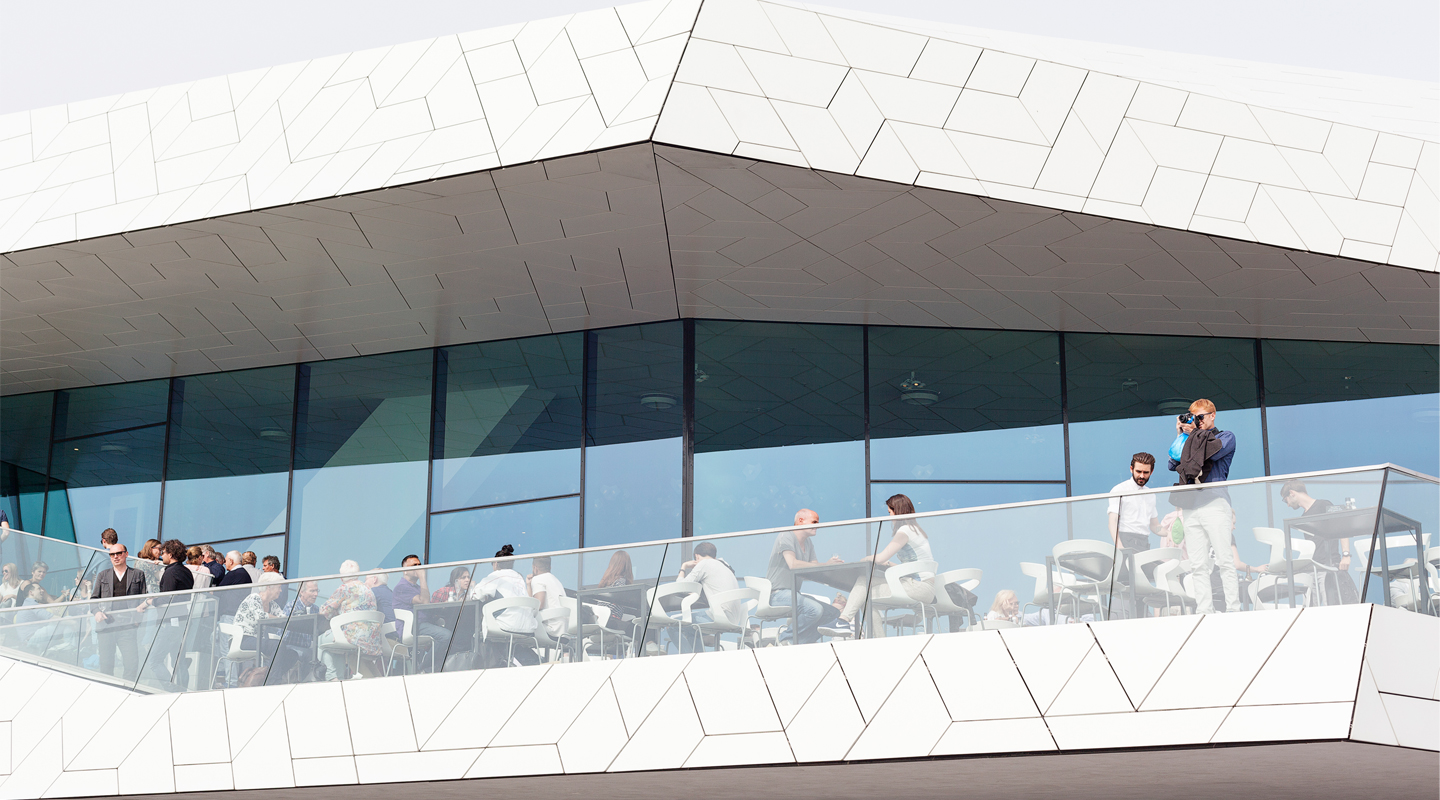 Jaap Guldemond is Director of Exhibitions and Curator of EYE. He previously worked as a curator at the Van Abbemuseum in Eindhoven and the Museum Boijmans van Beuningen in Rotterdam, where he came into contact with film-makers such as Aernout Mik, Isaac Julien, Steve McQueen and Douglas Gordon.

You’ve worked at a number of very special places, EYE is no exception. What is your favourite place within your work environment?

‘I think I’m actually just about the only person in the museum who can live with our so-called ‘flexible workstations’. I have a ‘dynamic agenda’ which means that when I’m at work in the museum, I’m often involved in consultations and meetings. More often than not I am in our restaurant where I can get a good coffee. The beauty of the restaurant is obviously the spaciousness and the view. It has a very un-Dutch allure; it’s so generous with space. If I need to concentrate really hard, I work from home and in the evenings and weekends, but the best ideas – paradoxically perhaps – come when I’m travelling, when I’m waiting for or sitting in the train, often in combination with recollections of new exhibitions I’ve seen or conversations I’ve had that day. This sort of experience is very fruitful for me, precisely because the daily grind of the museum is more at a distance. I find poor exhibitions are often as interesting as more successful ones!’

You initiated a series of exhibitions in EYE under the title ‘EYE on Art’, looking at the border film has with the visual arts. Why is it important for EYE to adopt a pioneering role in how film and art are displayed in a museum setting?

‘The 20s of the last century saw for the first time artists discovering the medium of film to create art. Ferdinand Léger began to make films and Marcel Duchamp used the medium of film in his work. In the following period, however, this artistic trend declined. The 60s saw interest in the media growing once more and many visual artists worked with film, but that was more often than not to document projects or performances; it is only really since the 90s that art and the moving image have come together.
That was when it became easier to get hold of a video camera, the video shop was just on the corner and artists really began to experiment with film as a language. From the beginning of the millennium, filmmakers became increasingly interested in what they could do with film in a museum setting. EYE is very interested in showcasing this development.’

What does ‘EYE on Art’ mean for the museum’s programming?

‘We have been going now for more than four years, but EYE is still new and not everyone is clear, as yet, about who we are: “Is it a cinema? Is it a museum? And if it is a museum, what are they displaying?” We have four cinemas where we run special film programmes, show our collection of films and important new arthouse films. I think it is interesting to show film in the exhibition space precisely because it expands the experience beyond that of the cinema where film can consciously make use of the opportunity offered by a museum space. If you look at the history of the experimental avant-garde film, there is almost no one who has done something with it, so there is this incredible fallow land that I think, as a museum, you just have to pay of attention to, but you should also show what is happening at present. These exhibitions are very important when we position ourselves within the landscape of the other museums.’

What happens at the interface of visual art and film?

‘Personally, I’ve always been interested in interdisciplinarity. In the peripheral areas, where one medium touches another, where one rubs against another, that’s where the most interesting things happen. The ubiquity of the moving image in society has led to fascinating new developments. The language of the film, the language of the moving image has been investigated by many artists and analyzed and incorporated into their own work. I want to showcase this in EYE. But moving images are also increasingly becoming part of the practice of other disciplines. I remember when I first saw Live/Life the ballet by Hans van Manen with live video. That was a sensation. Now one in three plays makes use of moving images; Ivo van Hove, for example, has been doing it for years, bringing theater and film together in an intelligent way. There is a lot going on.’

How does EYE differ from other museums?

‘I have worked in many other museums with people like Steve McQueen, Douglas Gordon, Anri Sala, Pierre Huyghe, Isaac Julien – artists working with the moving image. There is a lot of international attention to film and the visual arts, but in particular this comes from museums of modern and contemporary art, never in the context in which we do it. They look at an artist they find interesting and who coincidentally works with moving image; by contrast we are really trying to look at it from the perspective of ‘film’, and then to see what artists are doing there in an interesting way. Because of our focus, we offer the visitor a different context.’

‘We always start from the film as a medium and as a language. An exhibition with William Kentridge for example could possibly take place in the Stedelijk Museum, but for us it is interesting because he really works with pre-cinema techniques, with shadow images, with very simple animations. That requires a context, a different function, than if it was in the Stedelijk. And we are naturally specially equipped to deal with moving images, with projectors, with 16 millimeter film. We can do that just that bit better than other museums.’

The artist Steve McQueen made the move to the big feature film, and now reaches an audience of millions. Is the museum actually a logical place for film directors?

‘It’s the complete opposite! Steve McQueen started working in Hollywood, but most directors who make art-house movies don’t want to do that. That means that a film you spent two or three years working on has a three week run in the cinema and about six hundred people have seen it. That is a very small public in comparison with a successful exhibition. Our exhibition with the Quay Brothers drew something in the region of 28,000 visitors. The Quays said: ”In our entire careers never have so many people seen our work, really never!” “Bizarre!’

What is the importance to society of film that takes place at the intersection with visual art?

‘In general: you create a certain amount of freedom, which is not directly connected to utility or function. And you can reflect from that position on what is happening in the world at the micro and macro levels. I think it is interesting to showcase where the medium of film is being used in an artistically interesting way. It is a language, a grammar that has as much influence as the written language. As a museum, you start with these qualities, and then you look at “What more can be said?”‘

Which young artists who are currently at that intersection should we keep an eye out for?

Over the last few months we’ve had the exhibition ‘Close Up. A New Generation of Film and Video Artists from the Netherlands’ – where we showcased a large number of young artists who work at the interface between art and film. People who really stood out for me were Melanie Bonajo, David Verbeek, Jannis Rafa and Felix Burger who are all really up there with their international contemporaries. I also think the young Portuguese artist duo – Joao Gusmao & Pedro Paiva are very interesting: they make beautiful installations with dozens of short, poetic and at a meta-level philosophical 16mm films.

Are there things you miss in the current film circuit ?

‘In general Amsterdam has a fairly good selection of artistically interesting films. What is a shame is that often the less well known, really good movies only get a very short run in the cinema. You would like the cinemas to dare to allow films to run for longer, so that the films can “ripen”, to give the public the opportunity to discover them. In my opinion those films are disposed of much too quickly at the moment.’

What are the plans for the future?

‘What we hope to achieve is that the interface between film and the visual arts becomes more clearly defined, and gains a wider audience. That people begin to understand that film is more than just feature films, to recognise that film is an interdisciplinary medium, one that not only stands alone, but is fed by many other disciplines. Of course it helps enormously if you can keep coming back to that over several years.’