on performance and performativity in contemporary art 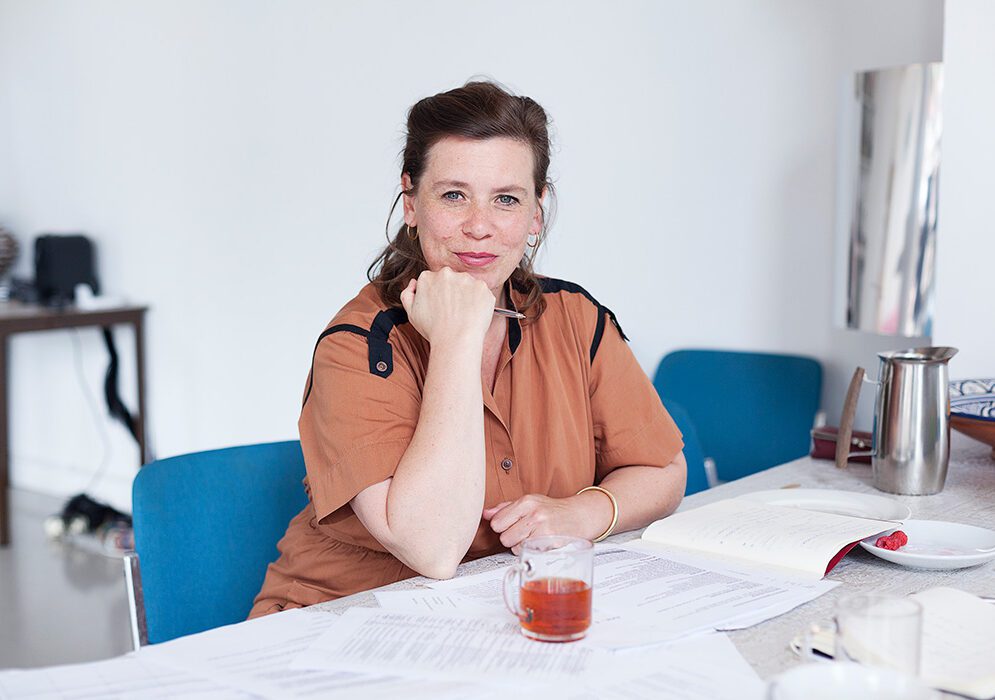 If I Can’t Dance, I Don’t Want To Be Part Of Your Revolution (If I Can’t Dance) focuses on the production of new productions and theory of performance and performativity in contemporary art.

Frédérique Bergholtz is the founder and director of If I Can’t Dance, I Don’t Want To Be Part Of Your Revolution. Before that, she was director of Marres in Maastricht (1999-2005). She put together the Visual Arts programme for three seasons of the Festival a/d Werf in Utrecht (2005, 2006 & 2007) and along with Annie Fletcher was curator of the biennial Art Sheffield (Life: A User’s Manual, 2010). In her role as Director of ‘If I Can’t Dance’ Frédérique Bergholtz has collaborated with many artists in the development and production of new work. She has been involved in live performances with (among others) the artists Matti Braun, Yael Davids, Mariana Castillo Deball, the group Ligna, Katarina Zdjelar, Haegue Yang, Maria Pask, Aurélien Froment, Keren Cytter, Suchan Kinoshita, Sarah Pierce, Jon Mikel Euba, Sung Hwan Kim and Jeremiah Day. She has produced works addressing various aspects of performance art, with (among others), Gerard Byrne, Olivier Foulon, The Otolith Group, Frances Stark, Luca Frei, Ruth Buchanan, Wendelien of Oldenborgh, Joachim Koester and Emily Wardill. For the current season she has commissioned Leonor Antunes, Alex Martinis Roe, Naufus Ramírez-Figueroa, Joke Robaard, Erin Alexa Freedman and Lili Huston-Herterich, Fred Moten and Wu Tsang, and Peter Pál Pelbart to create new works.

What is the history of If I Can’t Dance?

‘Annie Fletcher, Tanja Elsgeest and myself founded If I Can’t Dance over 10 years ago as a travelling festival which visited Utrecht, Leiden and Den Bosch. We didn’t belong to any particular place. Actually, we didn’t really want to settle down; we wanted to be a moving platform and to focus on the production of work instead of making exhibitions of works and then travelling around with those exhibitions. Facilities for our organisation were therefore of less importance; for years we worked in various small spaces and offices in Amsterdam, for example using a small studio at the Rijksakademie as our base, in order to keep costs down.’

What was the benefit of this very loose structure?

‘Artists benefit from showing their production in various venues instead of only on one location, that is why we need – and want – to find co-producers. They then contribute to the cost of the production, and of course you want your work to be seen by as large a public as possible. Therefore we have always been aware of the need to establish an international perspective and fortunately we were very quickly able to further expand our international network. This now allows us to seek the most appropriate type of institution to work with on co-productions. This means we’ve worked with the MoMA, the Reina Sofia in Madrid, LACMA in Los Angeles, but also with smaller institutions such as Buleoga z/b in Bilbao and in The Showroom in London, where you constantly experience new spaces and audiences, artistic visions and orientation. In this way we adapt to the many different venues and institutional expectations which is very interesting for us because it means that we adapt our performance productions to different scales and areas. And we present work in theatres such as Frascati and Het Veem Theatre (in Amsterdam).’

What is the philosophy behind If I Can’t Dance? Do the original ideas still apply?

‘When I look back on the last ten years, then yes: I can say that the original ideas do still apply. We continue to work on the basis of long-term engagements with artists: we try to create and shape our partnerships so that we can focus our attention on allowing artistic processes to follow their own course. And our overarching feminist philosophy has remained; in the spirit of Emma Goldman’s statement, which we chose as the name for our organisation, we work from a critical perspective that is always constructive.’

What is the current status of performance and performativity in contemporary culture?

‘It’s good to see that after ten years there is a significant focus on performance in visual contemporary arts. I think we have contributed our bit to this; it’s good to reflect on the fact that we were pioneers in this field, at a time when there was still a lot of prejudice, and that our efforts are now bearing fruit.’

‘Yes, for many people performance carried the connotation of being scary and physical, it had to do with endurance, with pushing boundaries. These clichés are happily no longer widely voiced.’

‘True, but that is a condition that suits the present day. We live in a ‘commodity’ world, but we are slowly coming to understand that commodity values no longer hold true. Our society is oriented more and more towards experiences. It is a very special experience to see something ‘live’, to have a shared experience, to talk afterwards about something you’ve seen together. Performance is temporary, but its effect is actually very strong.’

How is performance genre developing?

‘The former simplistic view of visual arts performance as a live act that the artist himself or herself performs has become much more refined – and please bear in mind, I do mean the general shared ideas around performance and not the actual practice, because that has always been very diverse. What falls outside the more limited definition, for example, is performance art with a theatrical component, a form that I personally find very interesting. There was much discussion about this in the ‘60s and ‘70s. You couldn’t have a narrative work; you had to keep everything restricted within a white cube – definitely not in a theatre – and ideally you had to work alone: never with other actors. That view changed in the ‘80s under the influence of new technology amongst other things, and also an extension of the contexts where performances could take place; artists started to work elsewhere than in galleries for example in public spaces, or in people’s homes. Even today you can see many performances that don’t shy away from a complex theatrical setting, or reflect on theatre principles. That performance art is now welcomed in museums is a really good development because it means more people are becoming familiar with an art form that was previously only known to a relatively small group.’

How do you think the art world looks at performance and performativity in visual arts? Is it still difficult to appreciate because it does not fit into the defined disciplines?

‘Yes, that is the beautiful, essential, quality of performance art; performance in my view is the discipline par excellence that challenges the conventions of what we understand by art. At the same time we can also see that the art world long ago stopped thinking along the lines of defined disciplines. Who nowadays calls himself a ‘sculptor’? There are very few artists who call themselves a “performance artist”. When we started in 2005 we worked with artists such as Gerard Byrne, Matti Braun, Yael Davids, Marianne Castillo Deball; all of whom are artists who work within a broader context for example video, installation, etc. and who worked with us to develop something that had to do with performance or with a live approach.’

What does If I Can’t Dance contribute to the development of artists? What is the importance of the organisation?

‘What we offer artists is that we follow their entire process over a period of two years and actively guide it. That is something that a museum can’t easily do; they’re not set up to do so. Performance requires certain conditions that are not always easy to achieve. That is often greatly underestimated. You have to rehearse, you may need costumes, props, a lighting plan; performers must be able to change clothes; there must be time to rehearse at the location itself, because often performance productions are very specific being based on the characteristics of a space. But finding the time to allow for all of this in our overcrowded programming is difficult. And many institutions which do now include performance in their programmes do not realise beforehand how demanding that can be; we are trying to increase awareness of this amongst our colleagues.’

You really do put two years of coaching into one production?

‘Yes, two years is the time it truly takes to build something together. The artists do research, create a publication, contribute to symposia; they may also show a “work-in-progress”. We arrange that here, in the office, pushing the tables to one side. You are always working towards the moment when something is ‘finished’, but actually that often proves to be a beginning for the work itself. Then you hope that there is interest from other parties, that the work can travel and continue to develop. A good example is the production by Joëlle Tuerlinckx, which we showed in Amsterdam and afterwards in the Tate Modern in London and after that in Playground in Leuven and then moved onto the Kaaitheater in Brussels during the Performatik festival – where it had taken on a new form because the artist wanted to experiment with time and had opted for a marathon of four hours.’

How is the cooperation in the field?

‘In Amsterdam we work regularly with the Stedelijk Museum, De Appel and Het Veem Theatre, and we hope very much to continue to do so. We have also set up an agenda, Performance Platform, along with Het Veem Theatre, NB Projects and DASARTS to promote performance art in Amsterdam, and to suggest routes people can follow through the provision of performance in visual arts, dance and theatre, and sometimes also music and poetry – again to show people how wide a field Performance Art is part of.’

What is the international status of If I Can’t Dance?

‘It’s very high. For five years we have formalised our international cooperation in a European consortium, Corpus, which brings together institutions that have long been focussed specifically on performance art. Those are the Tate Modern in London, Playground (STUK/Museum M) in Leuven, Kunst-Werke in Berlin, CAC in Vilnius, Lithuania and Bulegoa z/b in Bilbao. We will be cooperating with them all over the coming years to set up new productions.’

So you are actually still that travelling organisation. Always mobile.

‘Yes, that remains. We’ll always keep that. We want to embark on projects that are increasingly ambitious – as a team you inevitably become more professional, more expert. On the other hand, I think that it is of particular importance that just at the time when there is more interest in performance art, we need to give the more extreme and original productions a stage. We must continue to search for people who can continue to push the boundaries.’

Read more about If I Can’t Dance here.