on labour, art and resistance 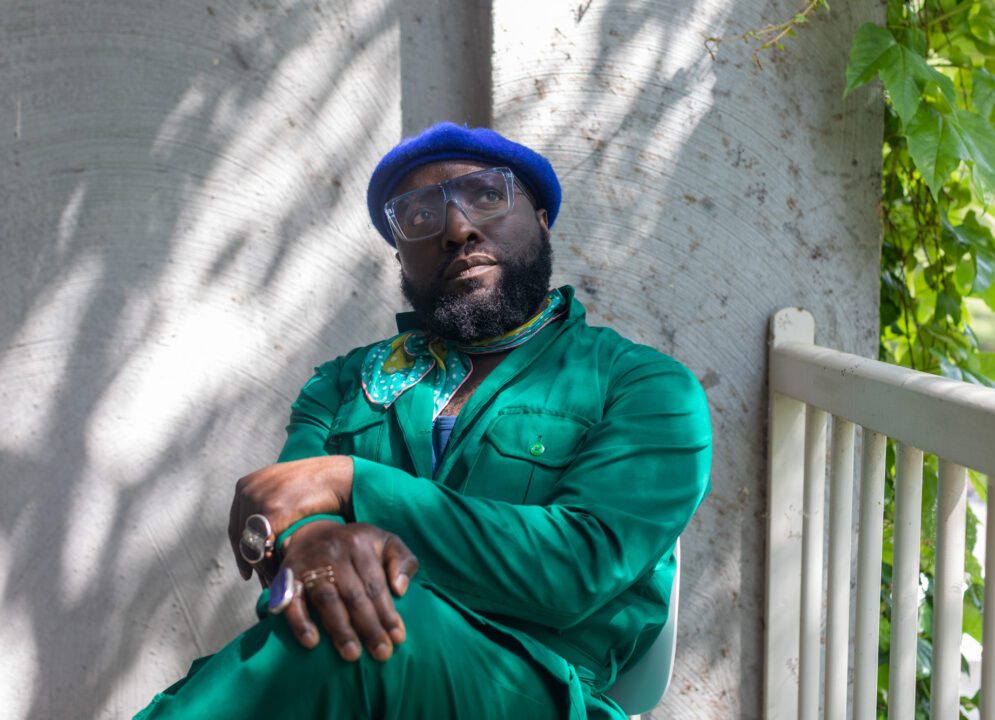 Bonaventure Soh Bejeng Ndikung (1977) is artistic director of the 12th edition of sonsbeek, an international contemporary open-air art exhibition in Arnhem. This edition stretches out until 2024 and is titled Force Times Distance: On Labour and Its Sonic Ecologies. Ammodo spoke with Ndikung a few weeks before the opening of the exhibition. ‘Art is embedded in our life, in our politics, in our society. There is hardly anything that concerns the art world that doesn’t concern everyone else.’

The current edition of sonsbeek runs from 2020 to 2024. What are your plans for the exhibition this summer and during the rest of the period?

Sonsbeek is an exhibition of about 40 works in Park Sonsbeek in Arnhem, of which seventeen are commissioned by us. At this moment the works are being mounted, we are preparing our public program, setting up our radio station. We’re also publishing a series of five publications for this edition, as well as a big, exhaustive catalogue. Watching these things materialise is very rewarding, despite the stressful build-up.

We don’t want to land in like a UFO to put up a large-scale exhibition and disappear. We truly want to engage with different communities in Arnhem: workers in barbershops, salons, restaurants – people from all walks of life. We will continue doing that in the coming years. In the meantime, we’re planning exhibitions at Stedelijk Museum Amsterdam with Imran Mir, an abstract artist and designer from Pakistan, Abdias do Nascimento, an Afro-Brazilian activist and painter, and Sedje Hamon, a Jewish-Dutch painter whose incredible work has somehow been sidelined in the art historical narrative. There will also be a big project at Centraal Museum Utrecht. These collaborations with several partners in the Netherlands we call conjunctions. A lot of things will happen in the coming years.

You once described exhibitions as the practice of “putting philosophies in action”. Which philosophies are being put into action during sonsbeek20→24?

Yes, I do see exhibition spaces as an important means of translating epistemologies into form. First and foremost, sonsbeek20→24 investigates philosophies of ‘work’. And there is a lot to consider when it comes to work in our current time. What is the social impact of work? What is our relationship with working spaces? How does work impact our environment? Who gets paid for what? Who profits from certain structures?

Today, the digital age is transforming work once more. The crisis forced us to work from home, which leads us to consider the spaces of work. A lot of us identify ourselves with the kind of work we do. So what does it mean, when working from home, to be cut off from the social environment in which we are embedded? Of course there are also plenty of people who don’t have the luxury of working from home, such as those working in health or sanitation – types of jobs in which migrants and women are overrepresented.

We also follow a historical thread. What did work mean in different time periods, in light of different industrial revolutions? What did it mean to work 60-70 years ago, when work meant going into a factory or a mine, or 300 years ago, when work meant going into the plantation? This also means looking at the history of slave labour and the trade of human beings, in which the Netherlands have played a big role. We cannot talk about work without talking about these things.

Then there is the question of which types of jobs are considered noble and which aren’t. Take sex work, which is part of any society but is looked down upon by many. The Netherlands has seen a pushback on brothels. This puts sex workers in a precarious position where basic things like hygiene, security and taxes aren’t adequately covered. Shutting down Red Light Districts pushes sex workers into the hands of more dubious and violent people.

Can you give some examples of artworks that illustrate these philosophies of labour?

All the works we commissioned are connected to labour and the sonic. Since I just mentioned sex work, let me point out Sex Work Is Honest Work, a neon sculpture by Nigerian-American artist Olu Oguibe that thematises sex work and positions itself in relation to different places in the city.

I could also point out the installation Black Anna by Zimbabwe-born artist Kudzanai-Violet Hwami, which focuses on the life of a Surinamese woman who arrived in Arnhem in 1727 to do housework for a rich family. There is an interesting story to this. In Park Sonsbeek there is this large colonial-style estate. When visiting the location, I asked multiple times where the money came from to build this place. Only after the fourth time, they mentioned that the 18th-century owners had plantations in Surinam and Indonesia. This interested me, because it reveals our entangled histories. But when you look at the spaces, the walls, the paintings in this estate, there is no narration of the people who did the manual work. There are portraits of the rich owners, but who did the cleaning? Who took care of the kids? We learned that there once lived someone who was called ‘the black Anna’ and who took care of the family’s children. That was our entry point.

Very little is known about the black Anna, despite the fact that she devoted her life to taking care of others. We could only find records of a medical doctor who got paid to cure Anna when she was sick, but there are no records of Anna ever being paid for her work. And the Dutch, being historical traders, are good accountants.

Since so little is known about black Anna, we invited artist Kudzanai-Violet Hwami to portray black Anna – not as a one-on-one portrait, since we don’t know what she looked like, but as an attempt at imagining her life. Black Anna stands for many people. In telling her story, one tells the story of many others.

We must ask ourselves: how do we narrate history? How do we fill in the gaps? And these gaps are not passive, you know – they have been actively erased. We are interested in the process of de-erasure. I sometimes get the sense that people in Europe think that the history of colonization and enslaved people is something that must be dealt with by the descendants of the colonised and the enslaved. But everything is entangled. We all have to look at it – and especially Europeans.

Would you say that with sonsbeek you are trying to dismantle a central narrative by highlighting the margins?

I don’t believe in margins. What is margin? It presupposes a centre. If there are people who see themselves as the centre, that’s their problem. I think these binaries are long outdated. We live in an incredible spectrum of existence that goes beyond centre versus margin. The idea that the West, or Europe, is the world’s centre is an illusion that has caused the world enough violence as it is. The earlier we distance ourselves from this worldview, the better.

So you are dismantling the very concept of centre versus margin.

I am just interested in looking critically at our being in the world. If that means dismantling certain structures, so be it. We need to think about what it means to live together. Whether you are categorised as male or female, black or white – these things are all constructs.

Does that mean developing a new language?

Yes. It’s a process of unlearning. This may be the biggest challenge of our time: to find a new vocabulary, and to rethink and redefine our perceived world.

How is the art world doing?

I don’t know what the art world is. To me, art is embedded in our life, in our politics, in our society. There is hardly anything that concerns the art world that doesn’t concern everyone else. It’s completely intersectional. Everything overlaps.

So how is the world doing?

That’s a hard question for me to answer. If the world was a plant, I would say it’s not growing very well. Look at the abduction of children in Nigeria, the thousands of people that have been killed in Cameroon in the past four years, the destruction of the Amazonian rainforest. We are not considerate to the world.

At the same time, there is incredible beauty. There is a lot of resilience. Humans as well as other beings stand up against the violence and greed of humanity. Plants still grow. There is such beautiful music. It is essential to acknowledge that.

How do you put that into action? How do you focus on the beauty of this world?

That’s why we do art. Beauty itself is political. We create moments of awareness, of exchange and dissemination of knowledge. There is nothing more beautiful or poetic than that: to give space for love. It’s the whole practice of making an exhibition and getting people to come together and see it, or an artist sitting in a studio and creating something. These are the most important acts of resistance – creating peace through art.

And for some people, just breathing is an act of resistance. As a person of colour, just waking up in the morning and going out into the streets, walking, breathing. That’s resistance, and there is beauty in that. So how do I put that into action? Just by living.

Find out more about sonsbeek20→24 here.