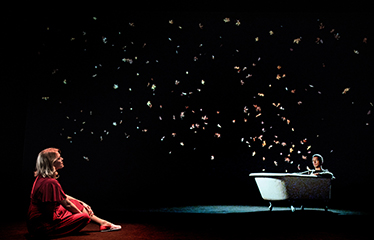 Blank Out is the new operatic production from composer-director Michel van der Aa. It is a composition for a ‘real’ soprano and a virtual baritone. The opera examines the human condition in a combination of live action, interactive 3D film and music. The performance premieres in 2016 during the Opera Forward Festival. Blank Out pushes the dramatic possibilities of opera by fully integrating technological resources in the theatrical performance. The project is a continuation of the technological innovation that Van der Aa applied in his film opera Sunken Garden (2011-2012), amongst other projects. Ammodo supports Blank Out to contribute to the creation of new work and the artistic development of Michel van der Aa.