Manifesta 12: ‘The Planetary Garden – Cultivating Coexistence’ took place in Palermo in June 2018. The title refers to the book, ‘The Planetary Garden’ (1997), by the French botanist Gilles Clément. In his book, Clément describes the world as a large garden which is shaped by man. The choice of Palermo came about because of its location, the city’s large botanical garden, and its tumultuous history. Different cultures and continents come together here and current issues such as climate change, refugee problems and increasing tourism give rise to research and new activities.
An important part of Manifesta 12 were the performances presented under the theme Procession. Since 1624 the feast of Santa Rosalia, patron saint of the city, has been celebrated with a procession. Because this traditionally forms an important part of Sicilian culture, Manifesta asked a selection of eleven performance artists to make new works inspired by the celebrations surrounding Santa Rosalia and in particular, the procession. Ammodo supported the creation of these works and spoke to Cooking Sections, Matilde Cassani, Fallen Fruit and Marinella Senatore about their work in Palermo. 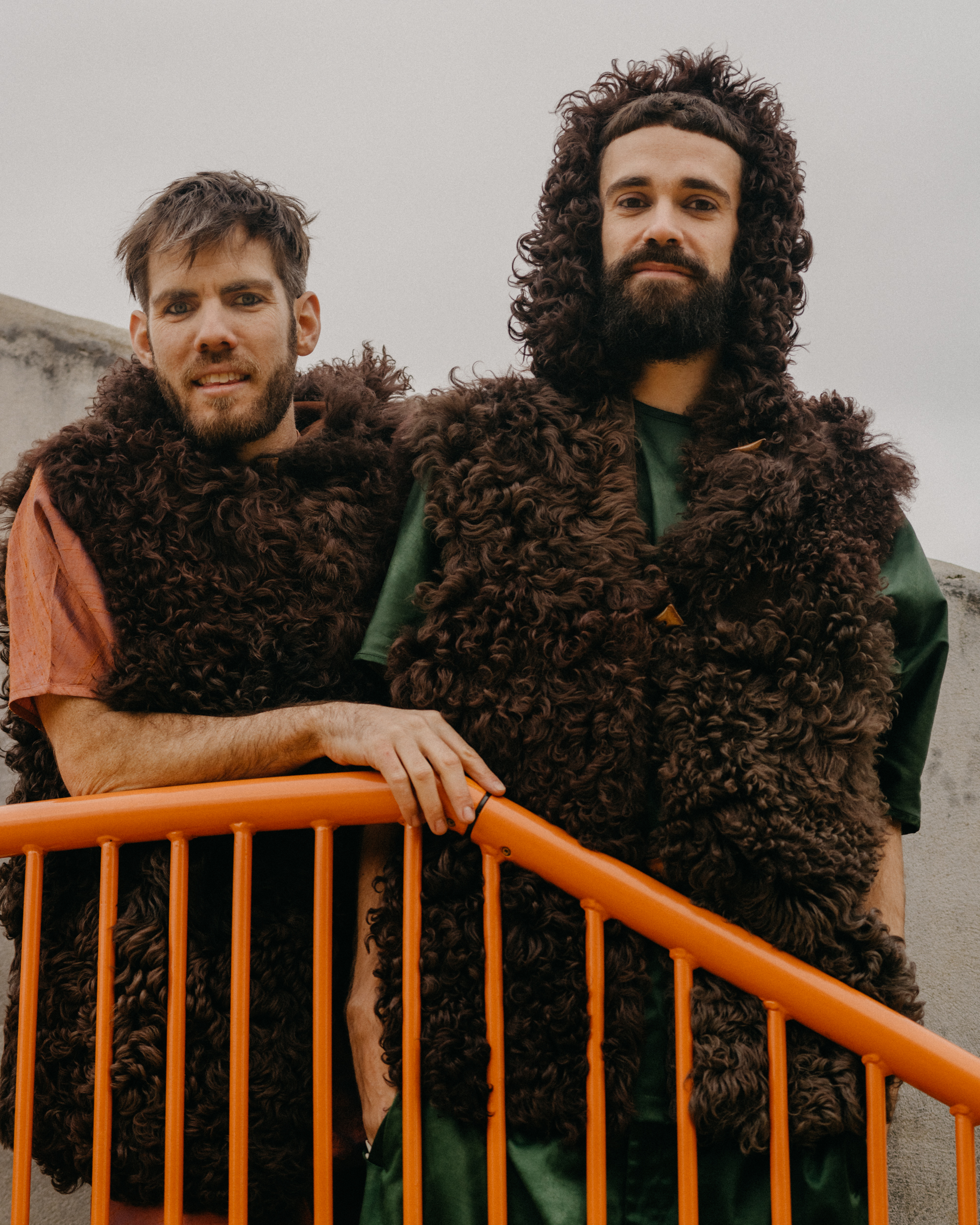 Cooking Sections, founded by Daniel Fernández Pascual and Alon Schwabe, carried out research on ‘dry water techniques’ for Manifesta 12. These techniques make it possible to cultivate plants without irrigation systems, allowing them to survive in dry conditions.”We set out to understand how different geopolitical forces are decisive for the way human beings and other creatures inhabit this planet. For Manifesta 12 we have developed a series of site specific installations that work as a microclimate around citrus trees in the city. 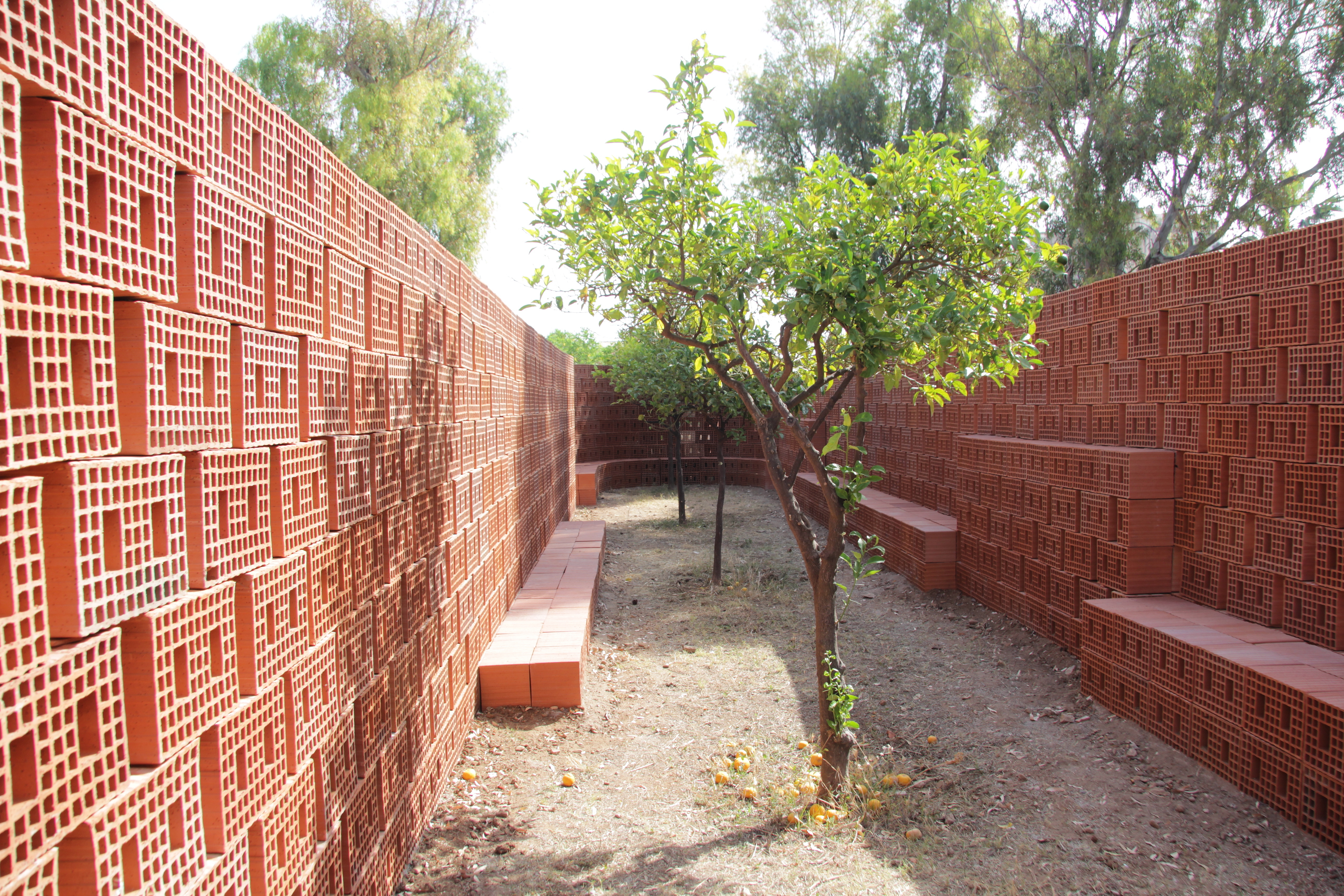 The project maps the problem of water scarcity in Sicily by studying contemporary versions of the ‘giardino pantesco’ (an old custom in which individual citrus trees are surrounded by a stone wall) and to develop new ways to reduce the scarcity of water around trees. The installations measure the actual performance of the trees during the six months of Manifesta. We also entered into a partnership with a small number of restaurants in the city. Together with them we developed a Secco al Sacco (‘dry picnic box’) that visitors can take with them to our microclimates to eat the contents alongside the trees.” 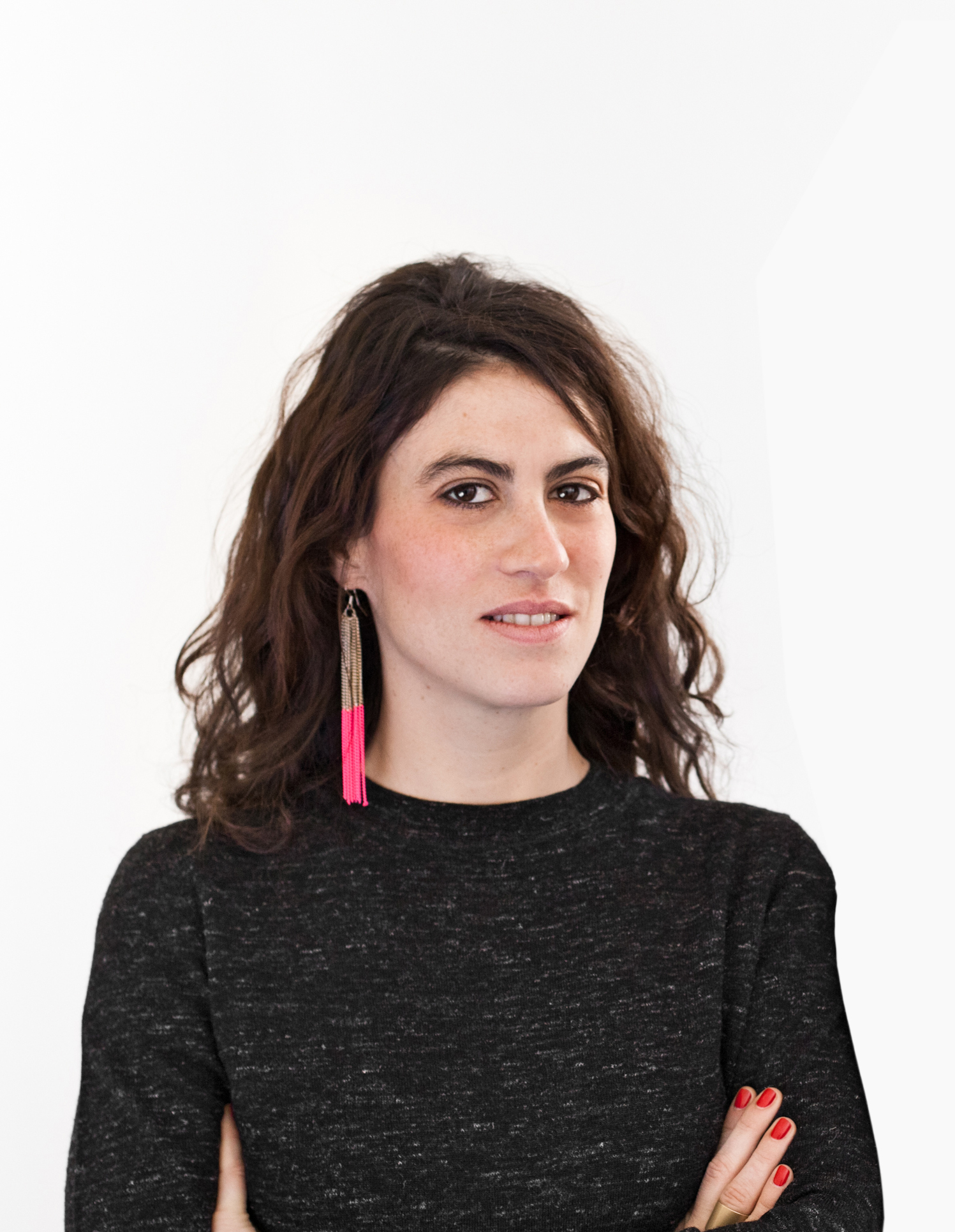 Matilde Cassani (Italy, 1980) presented ‘Tutto’, a ‘fireworks show’ at Manifesta 12. The show involved canons which shot coloured paper into the air. The work was specially designed for the crossroads ‘the Quattro Canti’ in Palermo. “My work is based on the traditions of the city and the prevailing attitude of welcoming many different cultural influences. ‘Tutto’ is a celebration that is based on Sicilian traditions from baroque times, but approaching them in a new way that fits the current variety of cultural influences in Palermo. 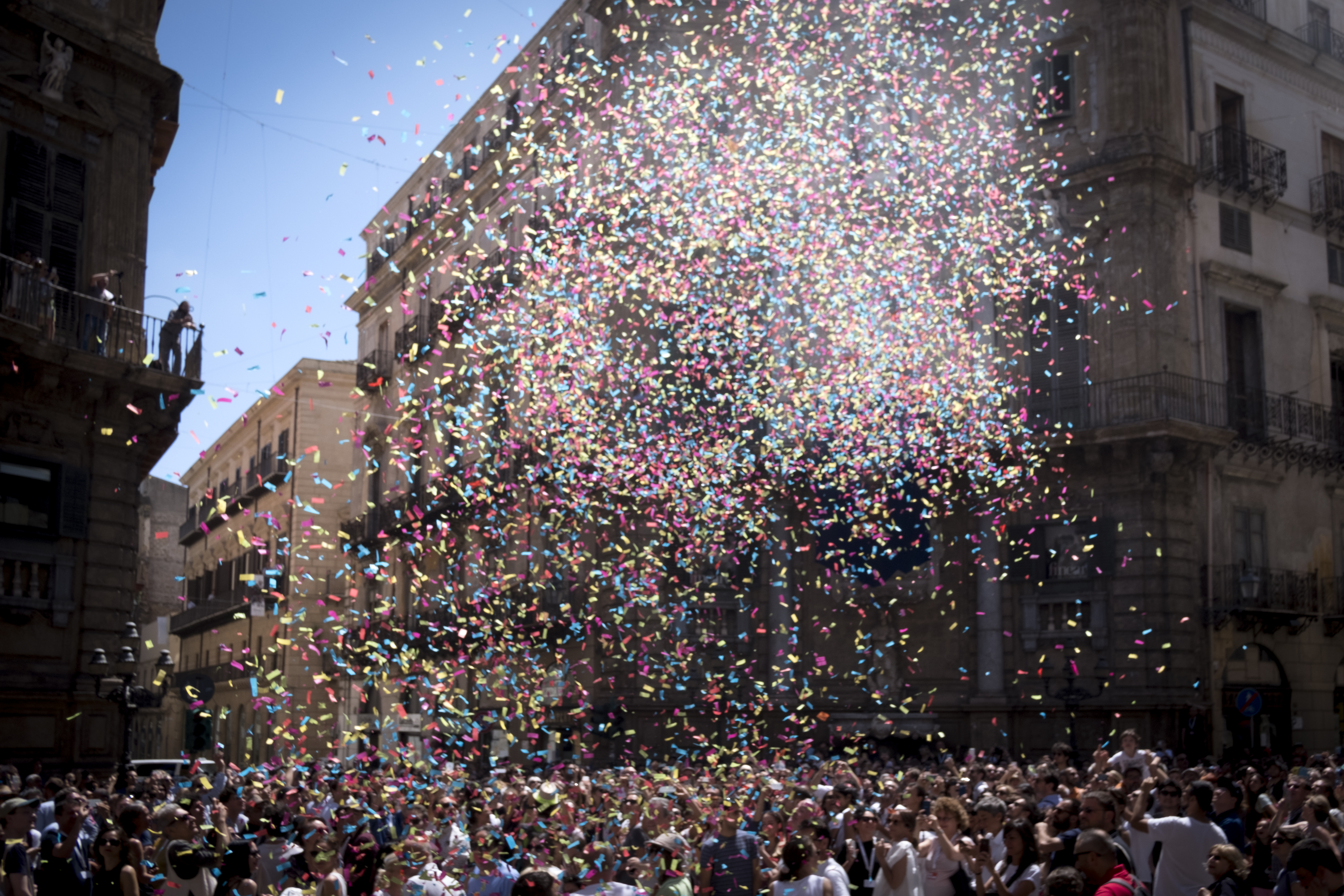 The decor is made up of embroidered banners with images of four originally Christian saints, but the saints have been given new attributes. They are symbolic of a specific Palermitan celebration around Santa Rosalia, the patron saint of the city, where certain customs are shared by the Christian and Hindu communities with both faiths coming together. I am fascinated by celebrations and especially rituals that relate to a specific traditional celebration in a non-traditional context.” 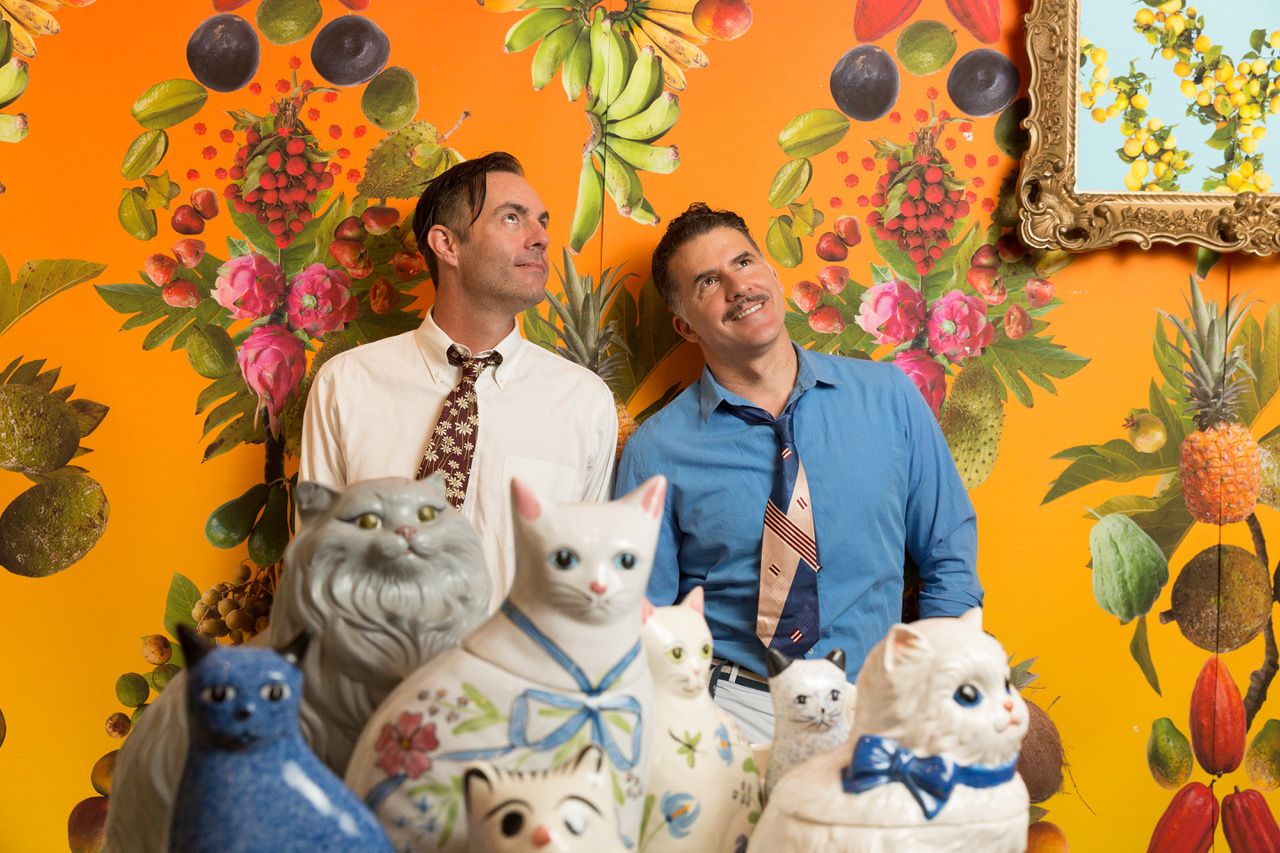 Fallen Fruit is led by David Burns and Austin Young. The collective was established in 2004 in response to a call for projects from the Journal of Aesthetics and Protest, a magazine based in Los Angeles.“The magazine posed the fundamental question: ‘Is it possible to take action as an activist without opposition?’ We explored the area of Silver Lake (LA) where we lived at that time and discovered that more than 100 fruit trees grew in and over the boundaries of public spaces. We mapped these fruit trees and took a series of photos accompanied by text such as ‘Who has the right to use public spaces?’ and ‘What does it mean to share openly?’ This led on to us setting up various collaborative projects with the public, involving public spaces and cultural institutions in the cities. 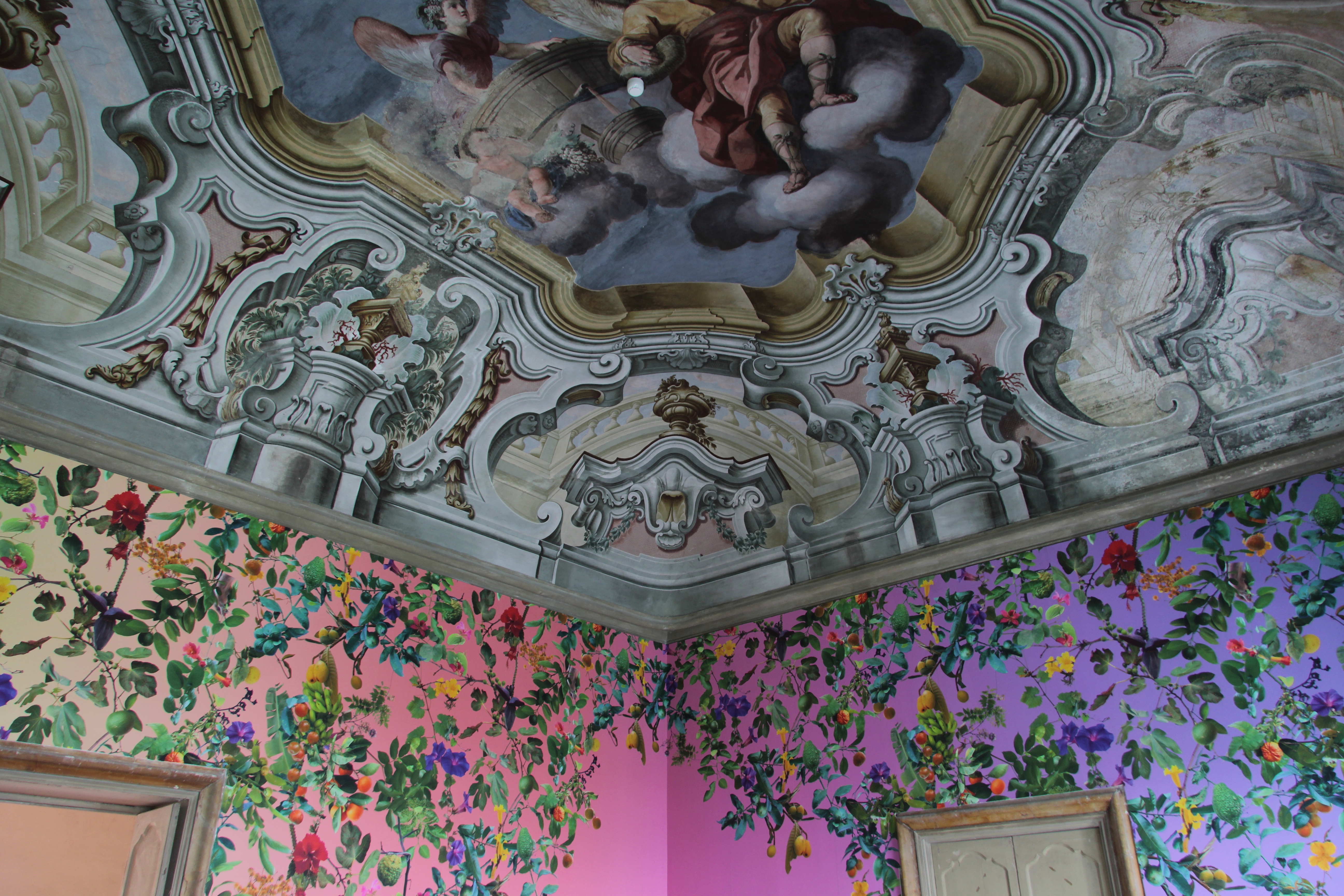 For our installation at Manifesta 12, entitled ‘Theatre of the Sun’, we took photos of flowers, plants and fruits which we found growing next to sidewalks, in alleys and in parks. We treated the city of Palermo as our studio and saw the vegetation as our materials. All the plants and flowers that we photographed originated elsewhere. Palermo is an assembly of different cultures which has been created through cultural exchanges over the centuries. The vegetation is proof of this. We decided to approach the city as a cooperative space, the streets being, as it were, places for social performances and where people socialise in parks and courtyards and have fun, making music and partying. Palermo has an open, social culture that offers space for this. In comparison with other cities it is unique in this respect. The celebration of the public is sublime!” 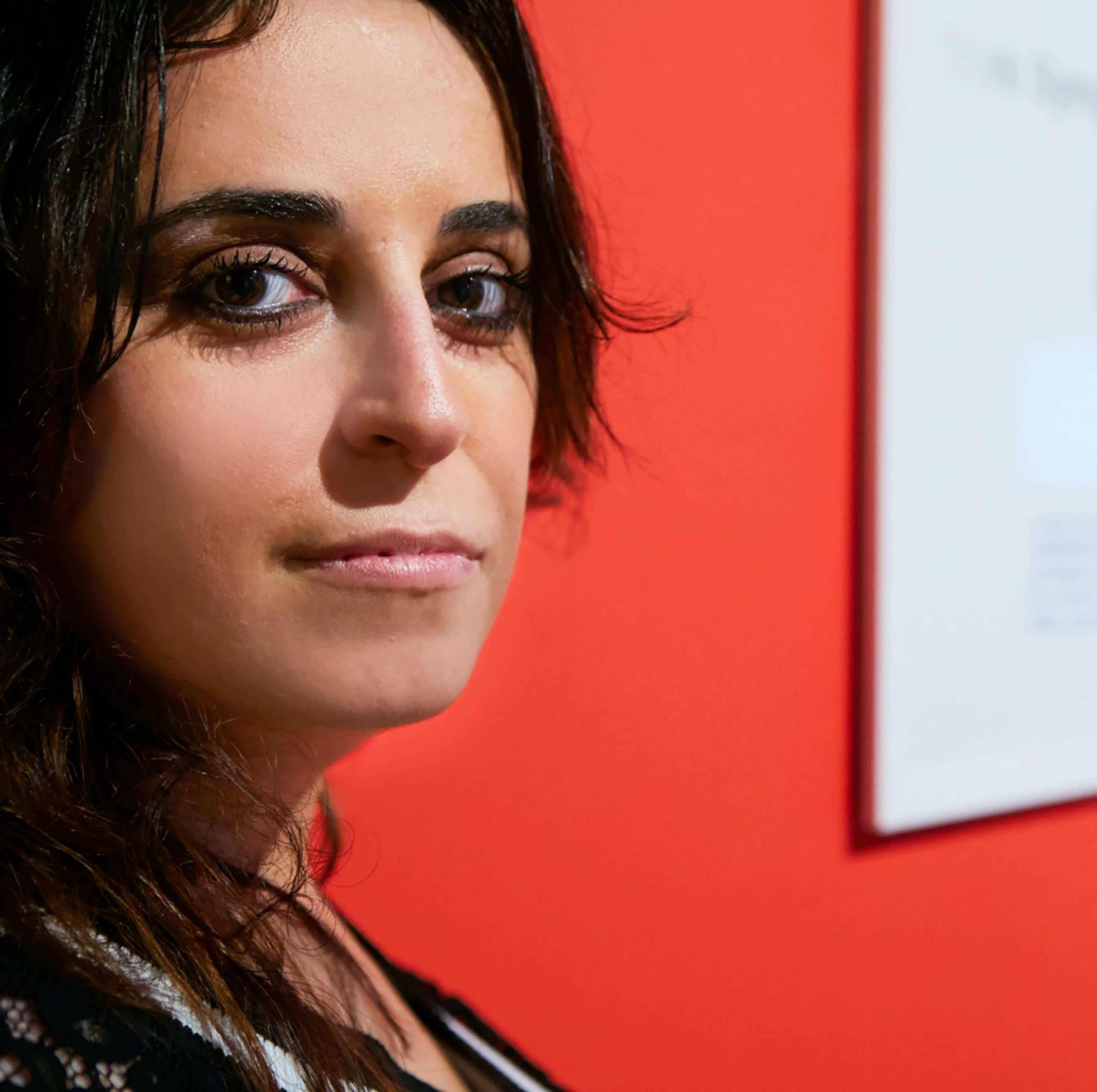 Marinella Senatore (Italy, 1977) created the work ‘Palermo Procession’ for Manifesta 12, a performance in a public open space in which the local community of Palermo, both amateurs and professionals, were involved.”’Palermo Procession’ depicts Palermo as a dancing city that is constantly in motion. Various disciplines such as literature, music and dance come together in the work. An important element is the participation of the local community. I invite people to join in my projects by posting notices, holding interviews and contacting local associations, universities, schools and specific groups such as unemployed people. 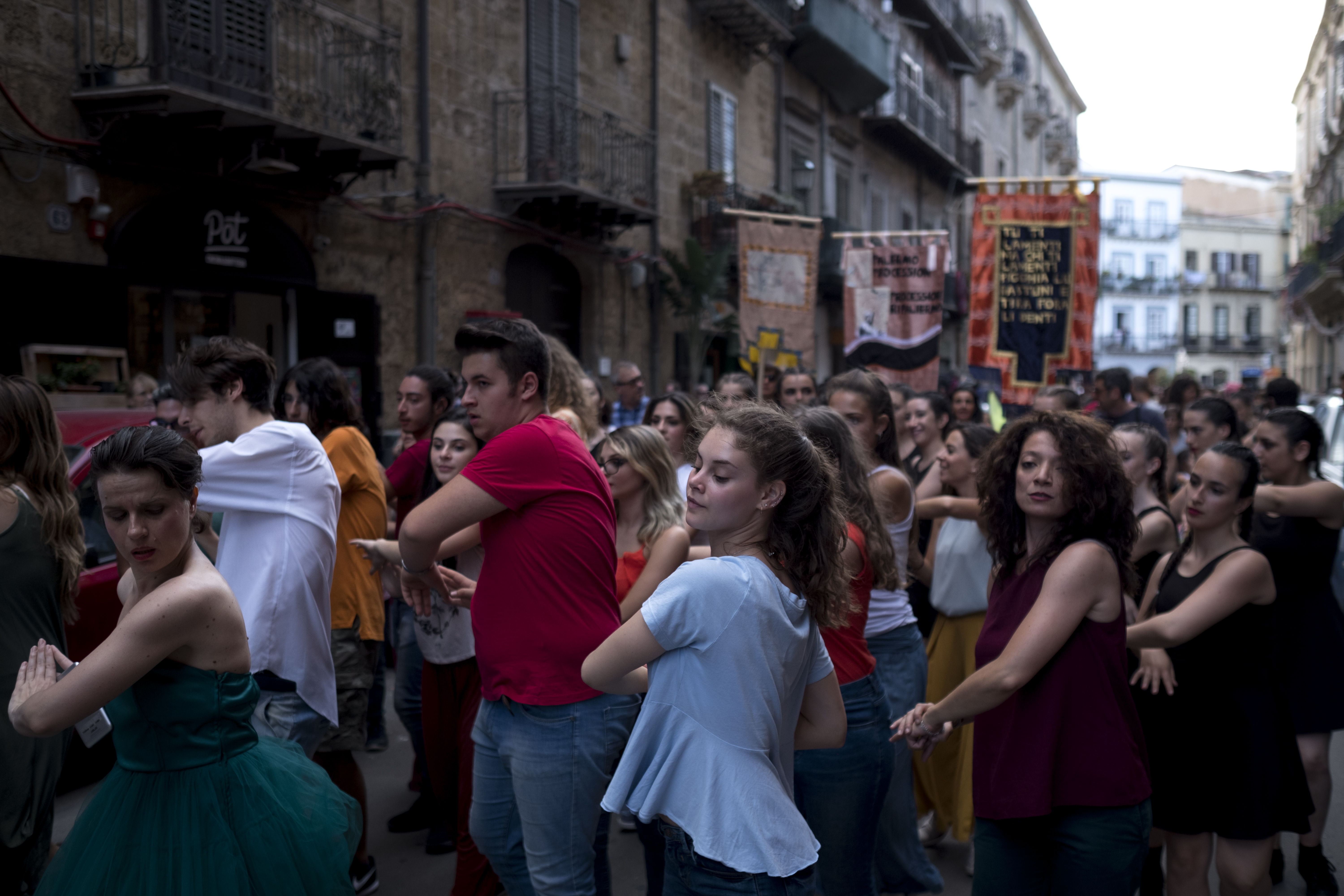 What I want is local energy. The process must be open and flexible. As an artist, I don’t want to force anything, instead I want to encourage a connection between different communities, which transcends any language or other barriers. For example, the Procession was led by a group of blind people to whom I had said: “If you go the wrong way, we will follow you.” Even if it is only for a while, it is important that people experience their own reality and not someone else’s. These kinds of interaction and unexpected collaborations matter, even if they only bring about very minor changes in the social structure. We artists are not able to change the world, our responsibility is to stimulate new thinking, generate small movements and above all contribute new visions. ”

Manifesta 12 can be visited in Palermo until 4 November 2018.