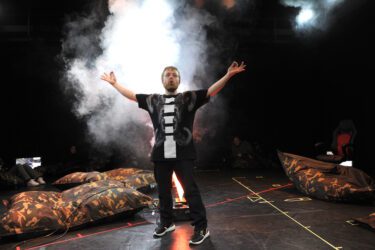 Showmachine was set up by writer, director and performer Joachim Robbrecht (1979). The Great Warmachine, a production directed by Joachim Robbrecht, explores the obviousness of peace in relation to the historical formation and current state of Europe. To this end Robbrecht has developed an artistic strategy called ‘Theatre of War’ in which he invites the viewer to experience war as a ritual and play.