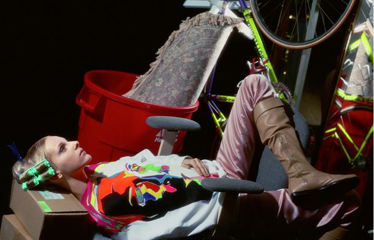 In the exhibitions Multiplyplex presents different videoworks, photographs, fashiondesigns and a sculpture of the artist collective Bernadette Corporation in a new context. With an emphasis on works from the mid nineties untill the middle of 2000. The Bernadette Corporation is adressing the fashion-, film- and magazineindustry since 1994. By acting as a professional company, the collective is able to appear in different shapes. In Multiplyplex the idea of an appealing facade and total superficiality is the main foundational point of view.

Multiplyplex appears in the context of the exhibitionseries Stedelijk Contemporary, in which a new generation artists are offered an opportunity to show new work.