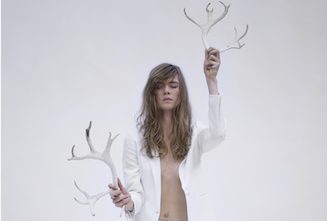 NBprojects performs projects created by the choreographer Nicole Beutler. Beutler is inspired by geometric Bauhaus principles: circle, square and triptychon shapes are a common theme. The circle was the central theme in 5: ECHO (2014) and the square in 6: THE SQUARE (2016) . In the new production 7: TRIPLE MOON (2017) the triptychon and the trinity are the main focus. Marjolein Vogels and Madelyn Bullard are performing three portraits that embody the different phases in a woman’s life: as a girl, a mother and an older woman.